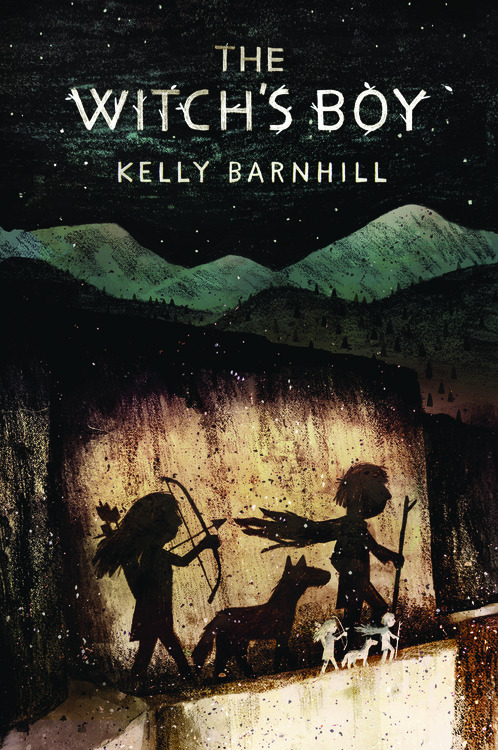 Kelly Barnhill spoke with me on a chilly, snow-covered day in November about her  latest book, The Witch’s Boy. She talked about magic and danger in middle-grade literature, how children tackle parental substance abuse, and how those kids can beat the odds. Even though Barnhill was battling a fearsome cough during our conversation, her spirit and enthusiasm was warm and inspiring.

The Witch’s Boy feels like a recently unearthed tale by the Grimm brothers. It takes place in a faraway Celtic universe, where a Bandit King searches for magic protected by a witch. The witch has a son, Ned, the surviving twin of a tragic rafting accident which left him melancholic and with a debilitating stutter. In order to prevent war and save the magic from the Bandit King, Ned must find his courage and inner strength. At first glance, he does not possess typical heroic traits. He is small and uninspiring, with a stutter to boot. Nevertheless, Ned takes up the mantle, and his sidekicks include a wolf and a young girl named Àine, (pronounced Anya) whose father, the Bandit King, becomes more obsessed with obtaining the magic as he nears it.  Danger faces the children at every turn as they rely on each other to survive and bring peace to their world.  It’s not clear the pair will succeed, and they suffer throughout their journey – in a pivotal early moment, Ned saves the magic from the Bandit King by commanding it to reside within him, causing his skin to burn and turn blue. Àine is torn between her distant father and Ned, and fears she may have to kill her traveling companion if forced to choose between the two. The jacket art shows the travelers in silhouette, with the girl aiming an arrow at the back of unsuspecting Ned’s head.

Barnhill was a teacher before becoming a full-time writer, and the experience provided much literary grist. She taught middle school, then worked in the basement classroom of a drop-in center for homeless youth in Minneapolis. Students often came from fragmented families, were victims of abuse and neglect, and others were unable to read at their grade level. Barnhill told me that addiction was a recurring theme in many children’s lives. “When I taught in highly stressed out communities, parental addiction was a big issue. A lot of kids were in foster care, and their parents could not get their lives together, partly because they were enslaved by their own addictions.”

While adults may recognize a foster home as providing a safer environment, children often cannot let go of their parents, and Barnhill found that many would have preferred to stay and endure alongside them. Children have an amazing ability to pick up on the smallest things, then internalize and misinterpret their meanings; blaming themselves for their parents’ addictions, for example.  In The Witch’s Boy, Barnhill illustrates how addiction is dangerous not just to those powerless to overcome it, but to loved ones relegated to the sidelines. “People love their addiction and they do love their child. But they love their addiction more, which creates an interesting dynamic,” she said. The Bandit King loves his child, and he loved Àine’s mother too – so much that, for a time, he was able to leave magic behind.  But with the death of his beloved wife, he reverts. “This happens with grief in real life,” said Barnhill. “People resume that addictive behavior, and all of the bad choices and disruption comes swooping back.”

Despite the overwhelming disadvantages that homeless children face, Barnhill found the experience thoroughly rewarding and that the children in her program were motivated to succeed. “It was an amazing job because the stats for homeless youth are so terrible,” she said. “I was the drop in teacher at this center where kids could come and be safe. Homeless kids can be skittish. It was a safe place with food and doctors, social workers and then there I was, filling in the gaps of their education.” Some of those children really big gaps, but because they were choosing to come to the center, they were more likely to beat the statistics stacked against them. Many of Barnhill’s students got their GEDS, and she helped others with their college applications and FAFSA requirements.

There’s no lack of violence in Barnhill’s book, and the children bear the consequences of their parents’ choices. Within all the cruelty and harm that befalls Ned and Àine, those are authentic, teachable moments. Barnhill considers her work and the work of other children’s book authors as crucial in shaping young minds. “Children’s book authors have a bit of the evangelist in them. We are all profound believers in children’s literacy and in the power of books for children.”

Developing empathy and an understanding of one’s place in the world requires reading powerful, moving stories.  Barnhill’s book is not escapist literature, nor is it an exercise in descriptive horror. Rather, its allow critical examination of societies where danger is ever-present. Children may take some comfort in reading them, but the story is frightening – the fate of an entire community rests on the shoulders of youth. Still, the experience of childhood is full of anxiety, and this book offers children the tools to navigate the complexities of the world.

So many middle middle grade books are all violence and no plot, or are overly saccarine and dull, but in The Witch’s Boy, no one is perfect the characters’ personalities change. “Human beings are complicated,” Barnhill said. “I never wanted to write a good against evil story because it’s not true. Look at human history – you don’t see good triumphing over evil, it’s  people making conscious choices to make good decisions. Just because a good side wins, it’s not the end of the story. The victors have to make good decisions after the war is over.”

While it seemed the book was written in such as way that a sequel isn’t out of the question, Barnhill wasn’t too sure it needed one. “I like stand-alones. The sequel is written on the heart of the reader. I have no intention to write a sequel right now because I’ve left my characters in a good place.”  Barnhill’s working another fantasy called The Girl Who Drank the Moon, and she’s also writing a libretto – Minnesota opera adapted her work as an opera for children, and will be sung by children.