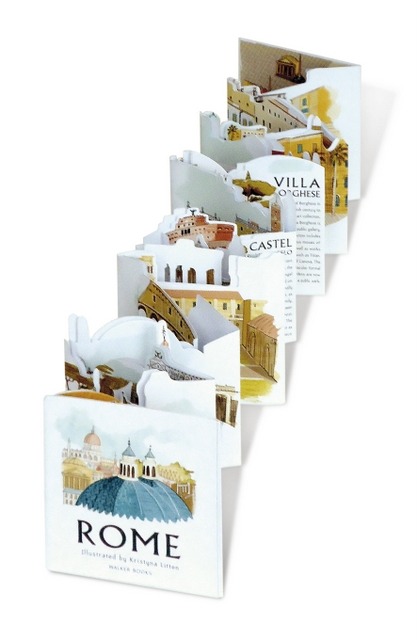 The Keepsake Cityscape series began in 2011 with a miniature foldout guidebook to New York City. The series has since expanded to include popular destinations such as Paris, London, and Washington D.C. Each volume is presented in a lovely little slipcase.

The most recent publication shares the pleasures of strolling through Rome, from visiting the Villa Borghese to exploring the inner workings of the Colliseum. Author-illustrator Kristyna Litten skillfully renders twelve of the Eternal City’s attractions with lively and bright mixed media illustrations.

Although these books are marketed to children, I’ve been collecting them from the start. They are a unique travel companion, and are small enough to tuck away in a luggage side pocket.  Most volumes have been written and illustrated by different authors, which makes these more interesting than the average mass-produced tourist novelty.  And for less than ten dollars, each of these pleated jewels can share their global tales on the same stretch of shelf.