The fifty-third annual New York Antiquarian Book Fair welcomed booksellers from all over America, and many came from across the Atlantic as well.  French sellers presented their treasures with typical Gallic flair, charm and grace. Below I share three of my favorite bouquinistes at the Fair and some of their eye-catching wares. More than two dozen dealers at the Fair specialized in children’s books, and two were from Paris.  Michèle Noret, whose shop is nestled in the tony sixteenth arrondissement, brought lovely examples of children’s literature from around the globe. Her most intriguing items were Soviet-era volumes printed for budding Communists.  One choice example was a second edition 1927 primer called Lenin for Children. Available for two thousand dollars, the book includes thirty-one full-page illustrations by Russian painter Boris Mikhailovitch Kustodiev, whose paintings had previously shown at the 1906 Paris Salon. Hailing from near Montmartre in the eighteenth arrondissement, Chez les Librairies Associés brought books covering a wide thematic selection (such as calligraphy and moveable books). They also enticed passers-by with beautiful children’s collectibles. Among their wares were seven titles illustrated by acclaimed Russian artist Ivan Bilbin, known for his renderings of Russian folk tales. One of those volumes, from the 1937 Père Castor series, was a fine first-edition of H.A. Andersen’s La Petite sirène for $350. Libraries Benoît Forgeot (you’ll find them on rue de l’Odéon in the sixth) brought an outstanding collection of illustrated books celebrating holidays and festivals spanning the fifteenth to the nineteenth centuries.  Available for a tidy $80,000, one particularly sumptuous volume was a perfectly conserved depiction of a 1688 regatta. The boating event was organized in honor of the marriage of Ferdinand de Médicis, Grand Prince of Tuscany and Yolande-Béatrice.  Fourteen gorgeously illustrated in-folio plates by Alessandro Della Via portray the extravagant festivities. An image from the book also graced the bookseller’s most recent catalogue. (see below) 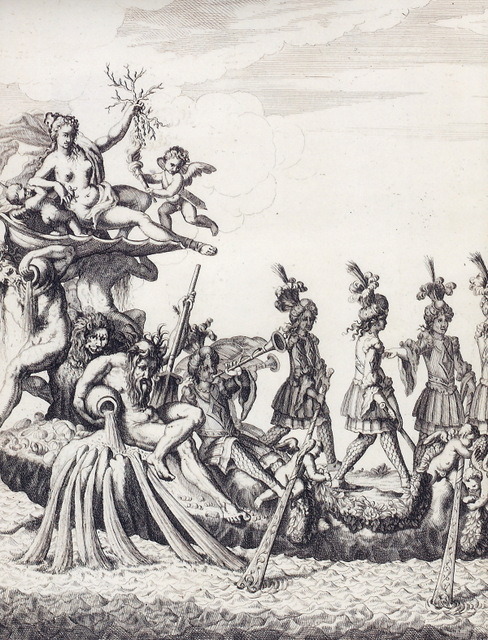