In late January, author Jane Yolen – considered by many to be the ‘Hans Christian Andersen’ of her generation  – spoke with me about the introduction she wrote to the Folio Society’s The Olive Fairy Book, a new edition of fairy tales originally published in 1907 by Scottish author Andrew Lang. We also talked about heroes, magic, and discovering hope through storytelling. THE OLIVE FAIRY BOOK Reproduced by permission of the publisher, The Folio Society, London.

There are twelve Fairy books, and the Olive Fairy is the eleventh in the series. As a child Yolen read many, if not all, of the Rainbow Fairy series. In the introduction to the Folio Society’s edition she highlights three of her favorite stories– ‘Jackal or Tiger,’ ‘Samba the Coward,’ and ‘Kupti and Imani.’

“I’m pretty sure I read them all as a child. I was one of those childhood readers who, once I found something that I loved, I would seek out everything that was related to it.”  The Olive Fairy Book includes all the elements necessary for riveting reading – heroic princes, wise fairies, talking animals, evil trolls, and witches. While being a prolific writer of children’s novels and poetry, Lang was recognized as a leading authority on world folklore and mythology.

Bound elegantly in olive green cloth, this edition of The Olive Fairy is itself a work of art, featuring an Art Deco frontispiece and bright gold illustrations by British artist Kate Baylay. Inside, readers will find more visual feasts– twelve full-color illustrations and thirteen black and white drawings.

Yolen discussed the era that inspired the artwork, and why it is wholly appropriate for this edition. “This book was published originally in 1907, which is when arts and crafts, art nouveau and art deco all come together.”

Yet as beautiful as these pictures are, this edition is perhaps most appropriate for older readers.  “I think the pictures in this book are exquisite. But they’re also not for children. They’re very sexy, very dark; some are quite violent. It’s exquisite bookmaking and of course the Folio Society is known for that. And the price reflects that; it’s for collectors. You can get the edition in paperback for very little money, but the point of this kind of book is that it’s an art object.” If a collector wishes to acquire the entire Rainbow Fairy series, The Folio Society is issuing all twelve of the books, each similarly designed and illustrated by a contemporary artist. The Olive Fairy Book is the tenth to be published. 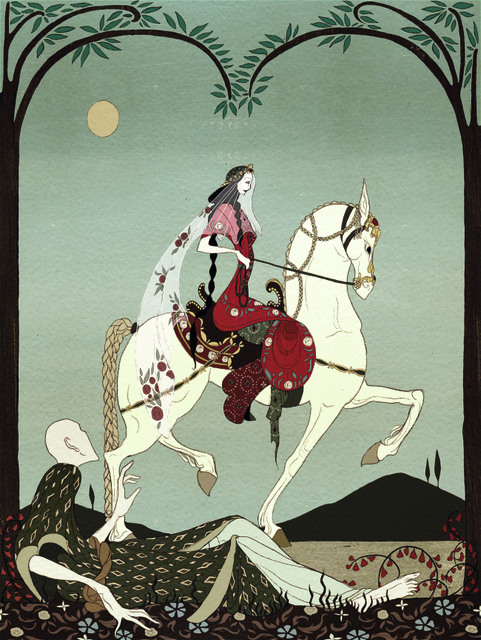 THE OLIVE FAIRY BOOK Copyright © 2013 by Kate Baylay. Reproduced by permission of the publisher, The Folio Society, London.

At least once a summer for the past twenty years Yolen has visited the gravesite of Andrew Lang in St. Andrews, Scotland, partly because his work played a significant role in her development as a writer. “He was one of the most important ones [to me.] And I happen to have a house there. When writers visit, I’ll take them to the grave. Or if I’m on my own I’ll go. It isn’t that I’m genuflecting at his grave, it just happens to be a lovely grave with a beautiful Celtic cross on it.”

In a classic example of serendipity, Yolen was unaware of the writer’s presence in the town before settling there with her late husband, David Stemple. “I didn’t even know about the connection when I first moved there. My husband was a professor of computer science, and took his second sabbatical at St. Andrews.” (Now she spends her summers there, and returns to her home in western Massachusetts each winter.) After some poking around, Yolen found a chapel with a plaque dedicated to Andrew Lang. “I discovered that Lang was buried on the cathedral grounds. It was a hunt.”

In November 2012, Yolen was the 22nd person and the first woman to deliver the annual Andrew Lang Lecture at the university, which was also celebrating the centennial of Lang’s death. “Every academic in Cambridge has lectured here. The month after I was born, in March 1939, an Oxford professor named J.R.R Tolkien gave the lecture, which became the iconic essay on fairy stories – and really changed my life as a writer.  So St. Andrews asked me, and I said, ‘How can I follow in these footsteps?’ As I said to the audience, ‘Here I am, walking in Tolkien’s shoes, who walked in Lang’s shoes – why not give me a ring and point me towards Modor?’”

Yolen eschews the typical hero stereotype for someone who demonstrates a greater definition of heroism.  She points to video game characters as an example of false heroes. “One of the problems I have with the huge emphasis in video games, now, is it’s like a shooting gallery. I look for stories about the quiet heroes, or the hero who said or did the right thing. I’m looking for stories where the hero is smart and learns along the way, and through their wits, skills, kindness and generosity, are the ones that win through. And they are heroes as much as anyone.”

Yolen has published more than 300 books over the course of her thirty-year career, many of which include the types of heroes she feels are instrumental in developing young minds. These characters are found in works of science fiction, fantasy, children’s literature and poetry.  Yet she didn’t always write fiction; like her late father, Will Hyatt Yolen, Yolen started out as a journalist, but unlike her father, she didn’t quite have the knack for sticking to just the facts.  “It turns out I was a lousy journalist because I made stuff up. That’s when I first understood that I was probably a fiction writer.”

Storytelling across genres and cultures

Often, Yolen’s work in one genre influences another.  A speech she recently gave has inspired a new trio of poems. “I’m writing three poems that come from a speech I’m giving on landscapes. I wrote some little pieces to show how one could use landscape, and then out of those pieces I carved out what was essentially a poem. That kind of cross-fertilization is really exciting.”

Andrew and Leonora Lang discovered the content for their books in faraway cultures and shared these stories with their English-speaking readers, for whom this was likely their first exposure to such exotic stories and locales. For the Langs, presenting these tales to an Anglo audience also meant modifying them by taking out some of the violence and making them more educational.

In The Olive Fairy Book, the Langs state upfront that they changed quite a bit because many of them were not originally intended for children. Yolen also discusses when changes in storytelling are subtler.

“We reclothe our stories to suit our audiences. “Once you have audience hanging on your words, you make changes. If you are telling a story to children, you might say, ‘I don’t want them to be up all night, I’ll take that part out.’ Or if you’re talking to your buddies at the pub, you’re going to stick in rougher, sexier elements, boasting elements.

Storytelling and a Poem A Day

Part of the creative process involves reading everything aloud, especially work intended for children. “Poetry and picture books absolutely have to be read aloud,” Yolen said,  “because they’re going to be read aloud. I also read novels and speeches aloud.  They’re very musical, so aurality is very important to me.”

In 2010, Yolen started a project called “A Poem a Day,” in which she committed herself to writing one poem every day, in January 2013 she convinced subscribers to sign up for her daily verses. Now she has 150 subscribers who receive a daily poem in their inboxes. “I explain to them that many of these poems are never going to be in books – they’re not good enough – but, the more you write, the better you get.”

Subscribers pledge that at the end of each month they will either purchase or borrow one of Yolen’s books. She felt that the experiment has been successful thus far because the daily deadline forces her to write no matter what. Of course, sometimes life intervenes. “Some days I cheat and write three or four poems in case something comes up. For example, recently I wasn’t supposed to look at a computer screen due to eye surgery, so I had written a few poems ahead of time.”

Yolen graduated from Smith College in 1960 with an English degree and great promise.  (Full disclosure: I graduated from Smith in 2003.) She also received an acceptance letter from Wellesley, but she said the choice for Smith was easy. “I chose Smith mostly because people sang, they seemed to have a joy that was missing at Wellesley.”  Still, her first two years in Northampton were challenging. “I learned that I wasn’t the smartest girl on the block. That’s important to learn. When I got to Smith, I thought, ‘piece of cake,’ and turned out it wasn’t. I was probably, comfortably, in the upper 20 percent of the class, but that was by working really, really hard.”

A poetry course she took with Pulitzer Prize-winner Anthony Hecht forever changed Yolen’s approach to writing and teaching. “I liked his poetry a lot. But he hated mine, and he absolutely tore apart everything I wrote in front of the class. I almost gave up writing.” Years later, while reading at a bookstore in upstate New York, the proprietor told her that her old poetry teacher had called to say he was sorry he couldn’t attend the reading, but wanted to let Yolen know that she had been the best student in her class.

“I asked who that was, and the woman said, ‘Why Tony Hecht.’ That was his method – he was harder on the people he thought had promise. That forever changed how I treated people when I taught writing. If there was somebody who was that good, I would take them aside and say, ‘I want you to know that I think you are the best one in the class, so I am going to be rougher on you than anyone else, because you are the one who needs to learn the most. I can teach the others how to write. I am going to teach you how to write at your very best.’ But at least I gave them a heads-up.”

“In those days in order to graduate with Latin honors, you had to write a thesis. Creative work didn’t count. (Now it does.) We were sitting in a coffee shop on Green Street, and he said, ‘Don’t you understand what academics do all the time? We try to understand and teach the sort of thing that you write!’ I said, ‘Ok, I’m going to write the book of poetry.’

In 2003 Yolen was awarded the Smith Medal and an honorary degree. “It all finally came around – because of that choice that Bill van Voris helped me make. I remember being at a dinner party at his house, and David and I were the only non-English department people there, and everybody around the circle was talking about the mystery novel that they were trying to write, and could I give them any points? So it totally validated everything that Bill had said.”

Over a century ago the Langs brought magic to children through The Rainbow Fairy series, and today Jane Yolen continues the tradition of crafting enchanted worlds for readers to enjoy. We part then, with prudent words from Andrew Lang from his preface to The Olive Fairy Book: “It is my wish that children should be allowed to choose their own books.  Let their friends give them money and turn them loose in the book shops!”