Halloween is still two weeks away, yet goblins, witches and faux headstones already claim valuable lawn space across the country. While the kids celebrate with silly tricks and sticky treats, why not indulge grown-ups this season with work by the marvelously gloomy Edward Gorey.

Located in the Flatiron neighborhood in Manhattan, B&B Rare Books is featuring three Gorey first editions; The Doubtful Guest, ($275) The Blue Aspic ($150) and The Loathsome Couple($100).  All three are in fine to very good condition and none will break the bank. Although these books aren’t for the faint of heart – unwelcome visitors, death and destruction feature prominently throughout – perhaps the most ghoulish tale is The Loathsome Couple.  It is considered a cult classic among Gorey collectors and tells such a shocking story that even the author acknowledged it as his most appalling. The murderous husband and wife couple is based on a real duo that perpetrated the chilling Moors Murders in England in the 1960’s.  Unlike in most Gorey tales, the characters in this book are caught and suitably punished.

Another way to celebrate Halloween would be to visit the Gorey House in Yarmouth Port on Cape Cod. Since the author’s death in 2000, the home has been converted into a delightfully unique museum that chronicles the life, work and charitable endeavors of the master of macabre. 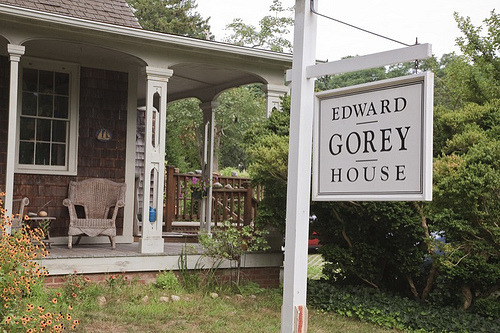 The Gorey House hasn’t planned anything special for Halloween this year. (The House co-hosted a Dracula Blood Drive with the Cape Cod Hospital in 2006, but hasn’t since then.) It is currently exhibiting original artwork from The Vinegar Works, Three Volumes of Moral Instruction.

Currently featured in the gift shop is a toy theater based on Gorey’s drawings and sets for his award-winning Broadway production of Dracula. It retails at a reasonable $25.00.

Sadly, Ombledroom, the twenty-eight pound white cat who ruled the House and delighted visitors for twelve years, passed away last summer at the age of twelve. Visitors can pay tribute at to the feline’s final resting place, which is situated under a Southern magnolia tree on a patch of lawn by the house.   Happy Haunting!