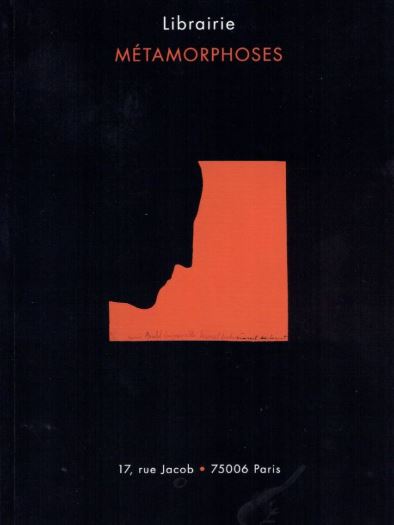 “Pure praises do not provide a comfortable existence; it is necessary to add something solid, and the best way to praise is to praise with cash-in-hand.” (Molière, The Middle Class Gentleman, Act I)

The second catalogue to appear from Librairie Métamorphoses is a tour de force. No surprise, considering that the Parisian firm was founded by Michel Scognamillo, former librarian and confidante to French collector Pierre Bergé, the lifelong business and romantic partner of fashion designer Yves Saint Laurent.

Before we talk about the contents, let’s look at the front matter. Smartly sheathed in a matte black binding and illustrated with a black-on-red silkscreen self portrait of Marcel Duchamp (#21 in the catalogue; price available on request), this volume is dedicated to Cédric Herrou, the 39-year-old olive farmer who ferried dozens of asylm seekers through France via what has been dubbed the French Underground Railroad. It is a fitting tribute, considering the contents of the catalogue are dedicated to the ideals of equality and freedom of expression.

So, what’s inside? Where to start? With the selection of material dedicated to poet Guillaume Apollinaire? Or the handwritten sheet music by George Bizet (€15,000)? Correspondence from George Sand to her dear friend Gustave Flaubert (€12,000) is marvelous, too, but perhaps the pièce de résistance is a 1671 edition of Molière’s The Middle Class Gentleman (Le Bourgeois gentilhomme), printed at the playwright’s expense and bound in its original vellum.

This particular volume is exceptional as a masterpiece of French literature and as a turning point in the editorial emancipation of Molière, who had personally financed the publication of his play Tartuffe in 1669. With The Middle Class Gentleman, Molière declined to transfer his rights to a bookseller after the play became successful, as he had done with Tartuffe. Now, the playwright retained all legal rights and profits for himself. And yet the haste with which this edition was printed is evident: typographical errors, erratic punctuation, and sloppy copy calibration abound, but these characteristics only add, according to the catalogue, “a certain charm” to the volume and to its rarity. Price available upon request.

There’s no website for Librairie Métamorphoses, but interested parties can visit the shop at 17 rue Jacob in the 6th arrondisement in Paris, call 33 06 13 92 76, or email at scolivre@gmail.com.

More treasures fill this beguiling catalogue, while the bibliographical notes are reason enough to seek it out. If only I had more than “pure praises” for Libraries Métamorphoses, but for now it will have to do

BY BARBARA BASBANES RICHTER ON JULY 13, 2018 8:00 AM
Readers of Art & Object may recall a story from January 2018 on the Parisian organization known as Atelier des Artistes en Exil (AA-E), an arts center that welcomes painters, poets, writers, and musicians chased from their homelands to its 10,000-square-foot space on rue des Poissonniers to practice their craft in peace. Since November 2017, over 200 exiles from Syria, Afghanistan, Somalia, and other wartorn countries have found artistic refuge at the organization founded by Judith Depaule and Ariel Cypel, a pair known for piloting engaged communal artistic spaces throughout Paris. Patrons are welcome to work in the studios, seek legal advice, or even take French lessons, all provided free of charge thanks to generous donations from benefactors around the world.

On July 8, the AA-E wrapped up a free two-week festival dedicated to educating the neighborhood (the working-class 18th arrondissement) about the people who participate in AA-E programming by hosting a selection of workshops, demonstrations, and exhibitions while also saying “merci” to the locals who welcomed the AA-E in 2017.
Highlights included a solo concert by Samih Choukier, a musician and activist who left Syria for good in 2010 to be able to perform as he pleased while also protesting the Assad regime. Congolese writer and performer Perlige Sita-Kouikani staged a one-man show full of stories from his childhood, and Ukranian refugee and choreographer Cleve Nitoumbi performed a vibrant fusion of hip-hop and street jazz.

The catch? The festival was held not at AA-E headquarters, but in gardens and salons offered as impromptu performance space by residents of the 18th arrondissement. “It [the AA-E] suffers from a lack of visibility in the neighborhood,” explained festival organizer François Kalinowski in a recent interview with Le Monde, “We want to tell our neighbors that the Atelier des Artistes en Exil is here, in your neighborhood, with you!” Here’s hoping the festival helped bridge the divide and encouraged greater awareness and hospitality for the people finding solace and a creative outlet at the AA-E.

As always, the organization is looking for support and donations, detailed here.

**This story first ran on the Fine Books & Collections Blog on April 13th.

Paris, tu es ma gaieté, Paris…
Spring in Paris–is there anything better? Doubtful. The icing on the cake? Today through April 15, the Grand Palais hosts the Salon International du Livre Rare et de l’Objet d’Art. This year the Salon is backed by France’s UNESCO commission and presented by president Emmanuel Macron. (To be determined whether he is greeted by hecklers as he was at February’s Agricultural Fair.) **Update: It appears Macron skipped the show.** The Salon has grown in scope and attendance over the past few years, and 20,000 visitors are expected to stroll the temple to Beaux-Arts architecture at the corners of General Eisenhower and Winston Churchill Avenues. This year’s special guests include the Institute for Contemporary Publishing Archives(IMEC) and the National Conservatory of Arts and Crafts (CNAM). IMEC specalizies in preserving archival collections at various publishing houses, while CNAM is a doctoral-degree granting program founded in the throes of the French Revolution. Both will be exhibiting materials culled from their respective archives.

Among the fifty participants at this year’s salon is Solstices (16 rue Pestalozzi, Paris), a rare books dealer specializing in architecture, political posters, Russian art, and surrealism. And Laurent Coulet will be showing a major Proust find.

Museum exhibitions, paper-making demonstrations, and book signings round out this delightful cabinet of curiosities, and with a ten-euro entry fee, the Salon is well worth the price of admission. (Bouquinistes, students, Friends of the Louvre, and LILA booksellers are admitted free.) Bonne foire to all!

Europe is in the throes of a massive refugee crisis with millions of asylum-seekers fleeing war-torn lands like Syria, Afghanistan, and Somalia. Among those forced from their homeland include writers, artists, singers, and other creatives who now can find refuge and a place to practice their craft in Paris.

Since November 2017, the Atelier des Artistes en Exil (AA-E), or atelier for exiled artists, has welcomed painters, poets, writers, and musicians to its 10,000 square foot space on rue des Poissonniers in the densely populated 18th arrondissement, where immigrants, blue-collar workers and artists live and work side-by-side. The organization is the brainchild of Judith Depaule and Ariel Cypel, a pair known for piloting engaged communal artistic spaces throughout Paris.

The AA-E provides WiFi-enabled workspace and fully-equipped workshops and sound studios where displaced artists have the opportunity to return to their professions and to also regain a sense of stability during a most difficult and stressful time in their lives.

Additionally, the AA-E organizes French language courses, meetings with other artists, assists with resumé writing, facilitates contacts with fellow professionals in France and throughout Europe, and guides asylum seekers through lengthy and confusing French bureaucracy processes. 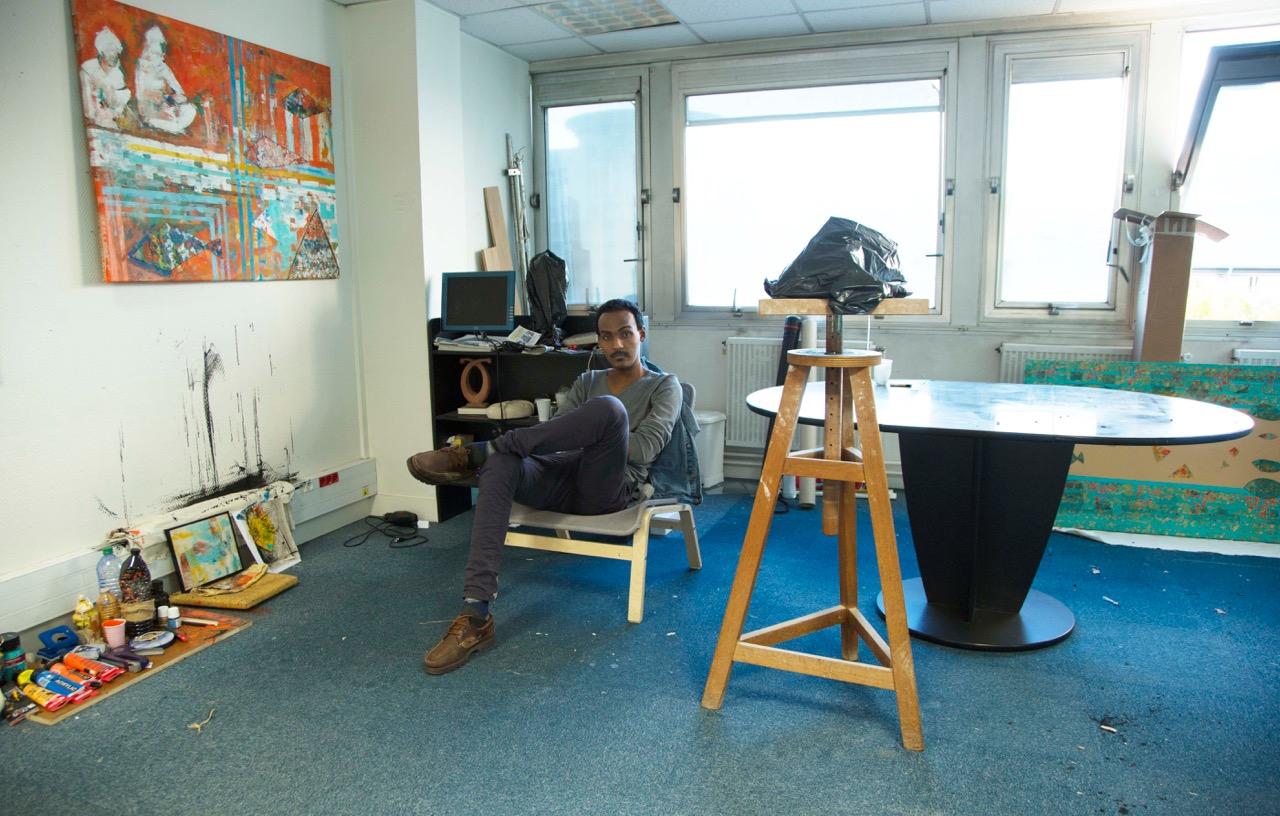 An artist in their AA-E studio

As a nonprofit, the AA-E is constantly looking for assistance from educators, artists, curators, teachers, psychiatrists, and librarians, as well as financial support and donations. The AA-E’s current wish list includes tables, chairs, notebooks, drawing supplies, and even food and temporary housing for its displaced patrons. To raise funds, the organization will be launching a crowdfunding campaign in January.

The AA-E lists over two hundred current members. Some work or practice in the studios every day, while others visit when they’re completing projects. Others stop by for meetings, workshops, or to receive legal advice. New visitors are always welcome. Learn more at http://aa-e.org/fr/category/atelier/  and check out some of the artists’ work on the AA-E instagram at https://www.instagram.com/atelierartistesexil/ .

This story appeared on January 20th at Art & Object. 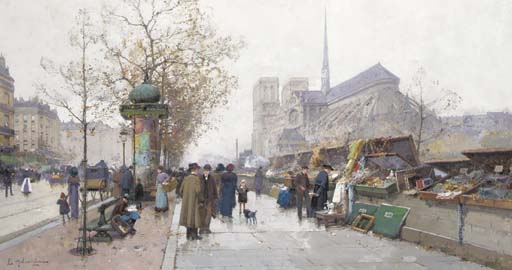 Paris remains a beacon of culture and sophistication and a week spent promenading along the city’s quais and quaint streets was balm for the soul. Among the many familiar sights were the bouquinistes, those riverside booksellers whose forest green stalls have been a fixture by the Seine since at least the 18th century. The tradition of traveling bookselling in Paris goes back even further; known as “libraries forain,” wandering booksellers plied their trade as early as the 1550s when they were accused of distributing Protestant propaganda during the Wars of Religion. Open-air bookstalls were banned in 1649, and meandering booksellers were chased out of the city by Louis V during the 1720s. The ill-fated Louis XVI tolerated their return in the 1750s, and by the time Napoleon I took power, the bouquinistes had reestablished their territory along the riverbank, where they’ve remained a fixture ever since.

Yet, the bouquinistes as we know them are in danger of turning into little more than trinket shops with matching roofs. Read all about it on the Fine Books Blog. 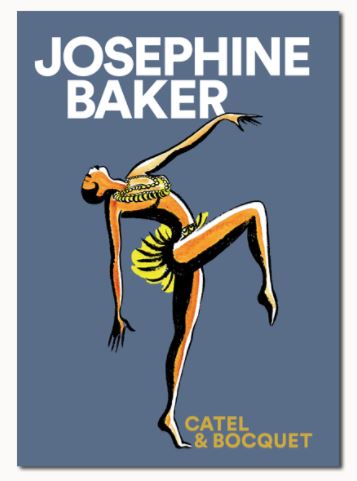 On June 3rd, Josephine Baker would have been 111 years old. A recently published graphic novel explores her life and rise to fame. Check it out on the Fine Books Blog. 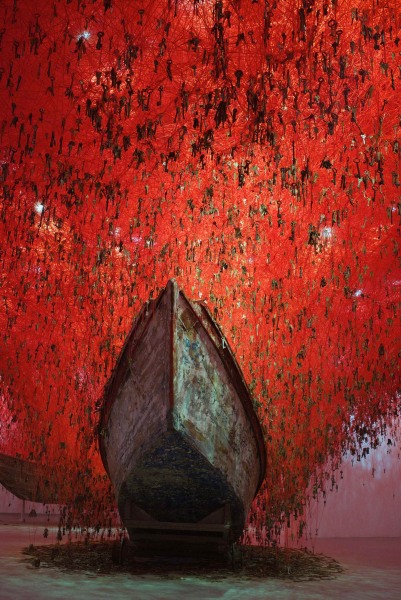 Japanese artist Chiharu Shiota stages a new exhibition at Galerie Templon in Paris. Read all about it on the Fine Books Blog 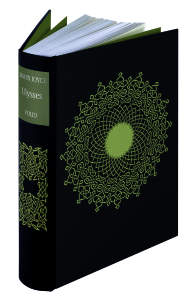 Today is St. Patrick’s Day, meaning Irish pubs from Boston to Dublin will be busier than usual and just about everyone will be sporting some sort of good luck charm. However, if the idea of day-drinking and parade-hopping turns you green, there’s still a few ways to let your inner Irish spirit free, even from the comfort of your own library. Check out the bibliophile’s guide to St. Patrick’s Day – The Fine Books Blog