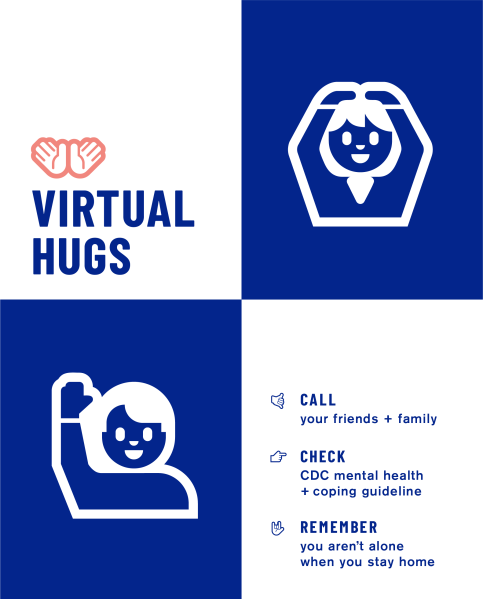 New York City is the current epicenter of the COVID-19 outbreak in the United States, its citizens in nonessential professions ordered to stay home in an attempt to slow the virus’s deadly march and prevent a catastrophic overload of the local health care system. Images of a city stripped of people are sobering in their eerie solitude.

Politicans, celebrities, and civic leaders have been spreading the word about why such drastic measures are necessary and how each of us has a role to play in combatting  a disease with no vaccine or cure. New York City’s Poster House has redirected its education efforts by encouraging the city’s denizens to look out for one another through a series of specially-designed posters, for which the museum turned to designer Rachel Gingrich. Bathed in cobalt blue and rendered in a punchy collage style, Gingrich’s three digital-only posters are available for downloaded here.

Earlier this week, Poster House released another series of PSA posters by its in-house designer Mihoshi Fukushima Clark, also available for download. Clark’s surprisingly upbeat series focuses on spreading the facts on social distancing and proper handwashing while also addressing the feelings of loneliness and isolation many of us are experiencing. As the virus has spread, so too, unfortunately, have xenophobia and anti-Asian racism. After learning about an increase in attacks on Asians, Clark created this series in an effort to remind viewers that we are all in this together.

Having only opened to the public last summer, Poster House is the first museum in the United States wholly devoted to exploring the history of posters and their role in shaping public perception on everything from cigarettes to disease prevention. Posters are designed to present information quickly, and successful posters convey their messages in five seconds or less.

In conjunction with the museum’s current exhibition on Chinese propaganda The Sleeping Giant, Poster House had been in the midst of a project collaboration with stir-fry doyenne and James Beard award-winner Grace Young. That project has been put on hold, but as word got out about racial discrimination due to fears concerning Covid-19, Young went to Chinatown to document the toll on the Asian community.  Filmed on March 15, less than 48 hours before Mayor de Blasio mandated all city restaurants to close, Part 1 shows Young walking through a neighborhood at the vanguard of what would soon envelop the entire country. The scenes feel like they were shot a lifetime ago.

Stay strong, stay safe, readers: We will get through this, together.